James Curran is Associate Professor at the Department of History and US Studies Centre, the University of Sydney.

In fiction, Richard Flanagan's The Narrow Road to the Deep North - a masterful recreation of the grim and awful brutality of life for Australian POWs on the Burma-Thai railway. Added to that was the emotional rollercoaster of the main protagonist's personal life both before he left and when he returned home. In non-fiction, Robert Caro's latest instalment in his magisterial biography of Lyndon Baines Johnson, Passage to Power. Who would have thought anyone could add anything new to the description of the day in Dallas when John F Kennedy was shot, or to the day of Kennedy's funeral in Washington DC? But Caro's writing in both cases is on another level altogether. And his depictions of LBJ's transition into the Oval Office, his desire to keep Kennedy's 'best and brightest' on board and his determination to grasp the legislative agenda are superbly recreated. Caro grabs you and never lets you go...

The main reading room of the Library of Congress in Washington DC. In 2010, whilst on a Fulbright scholarship to the US, I had the privilege of my own shelf out the back of this room, and to work in the reading room was simply a pleasure in itself. For pure majesty it is surely unrivalled. A true temple of scholarship, and my favourite building in the American capital apart from the Lincoln and Jefferson memorials.

That's easy. In 2010 a colleague and I published a book called The Unknown Nation: Australia After Empire. It was trying to get to grips with how Australians started the process of defining themselves anew in the 1960s and 1970s, when the old verities of British Australia crumbled under the weight of changing domestic and international circumstances. Simply because we were writing about the legacy of the British empire in Australia, one critic alleged that we were, ipso facto, seeking a knighthood in London for our efforts! My colleague and I are still laughing about this absurd, ludicrous claim! The work was subsequently shortlisted for the Prime Minister's Prize for Australian history in 2011. I was not laughing, however, when Tony Abbott reintroduced knighthoods and, moreover, bestowed one on Prince Philip earlier this year: one of the most self-indulgent, backward-looking and bizarre prime ministerial decisions in a generation.

Follow your passions and develop them to the fullest. It was advice I received very early from my mother and father.

I was working in Washington DC on a separate project and stumbled across a rich lode of files in the National Archives detailing American frustrations with the Whitlam Labor government in 1972. This included the fact that Richard Nixon ordered his advisers to explore options for ending the Alliance. It became very clear to me that this amounted to the most serious crisis that the US-Australia alliance had ever faced. Today we regard the relationship with the United States as both permanent and unchanging, and many assume the US will automatically come to Australia's defence in a time of need. But the history of the alliance shows that the US, quite understandably, has been decidedly unsentimental about Australia when it comes to protecting its own national interests.

Want to know more about Unholy Fury: Whitlam and Nixon At War? 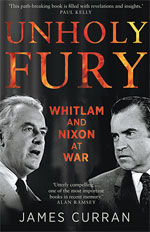 In the early 1970s, two titans of Australian and American politics, Prime Minister Gough Whitlam and President Richard Nixon, clashed over the end of the Vietnam War and the shape of a new Asia. A relationship that had endured the heights of the Cold War veered dangerously off course and seemed headed for destruction. Never before - or since - has the alliance sunk to such depths.

Drawing on sensational new evidence from once top-secret American and Australian records, this book portrays the bitter clash between these two leaders and their competing visions of the world. As the Nixon White House went increasingly on the defensive in early 1973, reeling from the lethal drip of the Watergate revelations, the first Labor prime minister in twenty-three years looked to redefine ANZUS and Australia's global stance. It was a heady brew, and not one the Americans were used to. The result was a fractured alliance, and an American president enraged, seemingly hell bent on tearing apart the fabric of a treaty that had become the first principle of Australian foreign policy.

Unholy Fury: Whitlam and Nixon At War is published by Melbourne University Press and available now