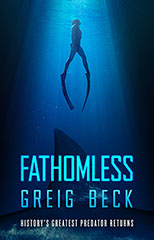 Greig Beck is an Australian author residing in Vaucluse, Sydney with his wife, son and oversized black German Shepherd. Beneath the Dark Ice was Greig’s first novel. He now has many novels published in over 10 languages, and his Alex Hunter novels regularly appear in the best seller lists.

I usually find something good in every book, but a recent one that made think about it long after I’d finished, and also found a place on my to-be-reread shelf, was a short and sharp one of only about 100 pages by D.T. Neal – called RELICT. It was an amazing tale, and as the pages turned I could feel the growing horror and suspense of being trapped somewhere remote by something with a monstrous size, appetite and intelligence.

Absolutely – it was the old Double Bay Library that was above Redleaf Pool. It had everything – books, beautiful grounds, and access to a swimming pool that I used to enjoy as a kid. The new one at Double Bay will now be my port of call as it is one of the largest and most modern in the district, and is leading the charge in a renaissance of library interest across Australia.

A lot of fun and funny stuff, and thankfully more good than bad. The fun stuff is the reviews and correspondence where my readers will ask questions or make assumptions, like: Beck has obviously served in the military, knows karate, spent time in the Antarctic, the Amazon jungle, or the Iranian deserts (no, to all of them – it’s all just research!).

Read lots, and also, just write. The late, great Australian author, Bryce Courtenay, gave this advice to me. It is the same advice given in Stephen King’s book on writing.

What inspired you to write Kraken Rising?

One morning, about ten years ago now, I sat at my kitchen table reading through the local paper, a small article caught my attention. Scientists in the UK were planning to drill into Lake Ellsworth, a prehistoric lake still liquid and buried miles below the frozen Antarctic surface. They hoped there would be life in its freezing, watery and sunless depths – but perhaps not ‘life’ as we know it. You see, the life they could find might be organisms that have been trapped there for hundreds of thousands of years – time enough for evolution to have started playing around with forms, sizes and even intelligence. I wanted to see a movie or read a book about that hidden lake and what could be in there, but none existed. The ‘what-ifs’ behind the Lake Ellsworth project kept me awake at night with the possibility of ancient or new life hidden away for countless millennia, and was the inspiration for my very first book, titled: Beneath the Dark Ice. I started writing the story myself, and the rest, is history.