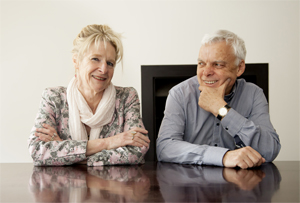 Two Steps Forward is the feelgood novel of the year from Graeme Simsion, author of the Rosie books and his wife, Anne Buist.

Anne: The Golden Egg by Donna Leon. We have just been in Italy taking a break from editing (actually was still editing…) and I wanted to read something local. I’ve read several of the Brunetti series, set in Venice, and she has a great feeling for her characters and setting.

Graeme: The Tattooist of Auschwitz. One of the privileges of being a writer is the opportunity to read books before they’re published. Heather Morris’s debut novel is, like Schindler’s Ark, heavily based on real people and events, in particular the eponymous tattooist, who met his wife in Auschwitz, found her again after the war, and lived in Melbourne until his recent death. Morris’s writing never gets in the way of the story—and the result is (as you might expect) a book that is compelling, challenging and moving. Due for publication January, 2018.

Graeme: The New York Public Library on 5th Avenue in Manhattan. When we lived in New York for six months, in a tiny apartment, I would go there during the day to write in the spacious heated room with free internet, surrounded by books and interesting people.

Anne: Sadly, it doesn’t exist any more but there was a private library in Williamstown when I was growing up there. Musty smelling, all books  with the same brown cover…but Mr Tersch who ran it had all the Enid Blyton books and a lot of Bobbsey twins ones as well. When he retired (I was about 8) he gave them all to me. I can still vividly recall the intense sense of excitement and pleasure - and I still have them.

Graeme: The editors (plural, female) who suggested that my high-flying lawyer-columnist-actor character (surely one of the ‘strong women’ we supposedly want in our books) should be shown doing some domestic chores to make her more appealing to women readers.

What’s been the best piece of advice you have received?

Graeme: When I was at Uni, I read a book on career planning. After any number of chapters of traditional advice on visions and strategies, they’d tacked on one by another author on the alternative approach of ‘winging it’. It was the first time I’d heard the expression - and it resonated. It helped me find my first job - as a computer operator - and every one since.

Anne: Not to read Goodreads reviews of my books (and when I did, to read a few of my favourite books to put things in perspective - just about every book has a one star review!)

Anne and Graeme: In 2011, we decided to walk the Camino from central France to Santiago de Compostela in Spain, some 2,000 kilometres (the inspiration for that is another story). We started ‘off season’ in winter, and in the first two weeks met only one other walker, a young Belgian. When he learned we were both writers, he encouraged us to collaborate on a mature-age love story set on the Camino. It was a very inspiring walk; we did it twice and will probably do one to Rome as well. It seemed the perfect background for a story about re-finding your way mid-life; and a chance to collaborate on writing - beyond the planning and review  that we always for each other’s books. 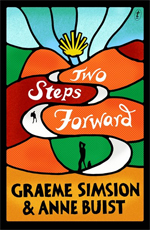 Zoe, a sometime artist, is from California. Martin, an engineer, is from Yorkshire. Both have ended up in picturesque Cluny, in central France. Both are struggling to come to terms with their recent past - for Zoe, the death of her husband; for Martin, a messy divorce.

Looking to make a new start, each sets out alone to walk two thousand kilometres from Cluny to Santiago, in northwestern Spain, in the footsteps of pilgrims who have walked the Camino - the Way - for centuries. The Camino changes you, it's said. It's a chance to find a new version of yourself. But can these two very different people find each other?

In this smart, funny and romantic journey, Martin's and Zoe's stories are told in alternating chapters by husband-and-wife team Graeme Simsion and Anne Buist. Two Steps Forward is a novel about renewal - physical, psychological and spiritual. It's about the challenge of walking an extraordinary distance and of working out where you are going. And it's about what you decide to keep, what you choose to leave behind and what you rediscover.