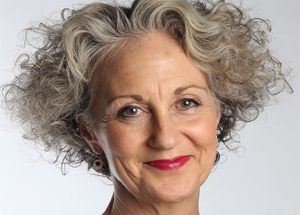 Elizabeth Farrelly is a Sydney-based columnist, author and academic. She has written three books of non-fiction and has been short-listed for the prestigious Walkley Award for excellence in journalism. Caro Was Here is Elizabeth's first book for children.

All the Light We Cannot See by Anthony Doerr is the extraordinarily beautiful story of a blind girl in wartime France, whose locksmith father creates intricate city models to teach her to navigate streets, and an orphan boy in rural Germany with a secret genius for electronics. These two very different lives, both horribly distorted by WWII, are nevertheless touched by sweetness. The story of how they intersect is told with such insight and delicacy the whole edifice seems to be spun from air. Brilliant.

My favourite library is the Long Room of Trinity College in Dublin – less for the books it contains (including the 9th century illuminated manuscript of the Book of Kells) than for the beauty of the space. Modern libraries are usually flat-ceilinged, metal-shelved and rather depressing. But from ancient Alexandria to about 1900, libraries gave you immense and lofty headspace – dreaming space. The Trinity College Long Room, with its fine, book-filled timber galleries, narrow space and high, vaulted ceilings is a particular jewel. At once elegant, dignified and exhilarating, it was long rumoured as the basis for the Jedi Temple in Star Wars II: Attack of the Clones, but LucasFilm denies this.

I was in Africa in June 2014 when Daily Telegraph blogger Tim Blair included me on his list of “left-wing frightbats.” He described us collectively thus: “They shriek, they rage, they cheer, they despair, they exult, they scream, they laugh, they cry! There’s never a non-emotional moment in the lives of Australia’s left-wing ladies’ auxiliary… Who is Australia’s craziest left-wing frightbat?”

This was funny because the company was august – Anne Summers, Jane Caro, Clementine Ford, Jenna Price et al – which immediately made “frightbat” a term of aspiration. Facebook pages were set up, groups formed and t-shirts sold. Everyone wanted to be a frightbat. Like Alan Jones’ “Destroy the Joint,” it was fun. I wrote my rebuttal in a safari lodge beside a roaring log fire, watched by the roaring head of a lion. A lot of roaring. That seemed appropriate.

Never give up. Many of the best things in life come not through luck or money or even talent (though these are certainly helpful) but through simple determination. Press on!

What inspired you to write Caro Was Here?

Caro Was Here is a story for 10-12 year olds. I wanted to write the kind of book I loved as a kid - an adventure story with a vivid sense of good and evil played out on a landscape whose magic was part of its reality. I hoped to capture the kind of magic with which I think children invest reality - and which I recall from my own childhood in New Zealand - seeing it lit from within by imagination.

Caro Was Here is set in Sydney because this breathtakingly beautiful city is so under-represented in literature. And I chose a bold female lead because I wanted it to be a story about the intense yearning for freedom that I felt as a child; I wanted her to have the courage to pursue freedom and the intelligence to deal with the consequences. I wanted to force Caro to dig deep, using all of her courage, ingenuity and smarts to battle the constraints and, in the end, to survive.

Some of the inspiration was personal experience. When my editor first read the manuscript she made me tone down the school-escape scenes saying, “middle class children would never be that naughty.” I had to say, “I was. Not often, but I was once that naughty.” But later, when she said with a look of consternation, “so, are we teaching children to make bombs?” I had to say “no, I do not believe it would work.” Ahah.