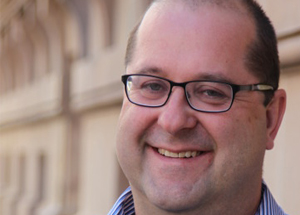 David Hunt is an unusually tall and handsome man who likes writing his own bias for all the books he has written (one). He has worked as an historical consultant and comedy writer for television and also has a proper job. He owns a cat and has a birthmark that looks like Tasmania, only smaller and not as far south.

I'm an omnivorous cross-genre junky who enjoys everything other than $2 bodice-rippers and articles about cars. I'm going through a Michael Robotham phase at the moment and have just finished Bleed Like Me, which I found difficult to put down. On the history front, it's hard to go past James Boyce's 1835 or Van Diemen's Land, both of which I've dipped into regularly in writing True Girt (hopefully out soon). I've just written a kids' picturebook, The Nose Pixies (definitely out August), so I've read quite a few books for younger children recently - my favourite is Sonya Hartnett's The Boy and The Toy.

I spend a lot of time researching at the Mitchell Library, which is very Last Days of the Raj. You can smell the crustiness, which I love. Woollahra is also very nice...

I have had a couple of one word reviews - what they lacked in verbiage, they made up for in passion. I've read on the dustjacket of Girt that I'm an unusually tall and handsome man, which I'd find strange if I hadn't written it myself. Some people compare my writing to that of Bill Bryson, which is very nice, while others liken it to that of the old uncle you only see at Christmas and who tells jokes that nobody finds funny, which is not quite as nice.

On the writing front, it's the age-old, "Kill your darlings".

In life, it's probably, "You look better in black."

What inspired you to write Girt?

Girt is the child of midlife crisis. was feeling vaguely dissatisfied with fifteen years working in the law and government and asked Charles Firth, a founder of The Chaser, to help me package some of my university sketch comedy material to tout around to TV producers. Instead, I found myself working on a comedy project Charles was doing on Australian history, which was unfortunately a darling that was killed too soon. I got incredibly interested in the history, not just the comedy, and an article I wrote on the Burke and Wills expedition was passed onto my publisher, who asked if I wanted to write a book in similar vein. I said yes and it was bloody hard work, so I hope you like it.

Want to know more about Girt? 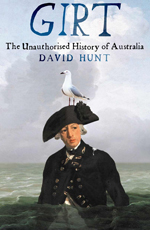 Winner of the 2014 Indie Award for Non-Fiction.

Girt. No word could better capture the essence of Australia...In this hilarious history, David Hunt tells the real story of Australia's past from megafauna to Macquarie... the cock-ups and curiosities, the forgotten eccentrics and Eureka moments that have made us who we are.

Mark Twain wrote of Australian history: "It does not read like history, but like the most beautiful lies... but they are all true, they all happened." In Girt, Hunt uncovers these beautiful lies, recounting the strange and ridiculous episodes that conventional histories ignore. The result is surprising, enlightening – and side-splittingly funny.

Girt explains the role of the coconut in Australia's only military coup, the Dutch obsession with nailing perfectly good kitchenware to posts, and the settlers' fear of Pemulwuy and his Amazing Technicolor Dreamingcoat.

It introduces us to forgotten heroes like Mary McLoghlin, transported for the typically Irish crime of 'felony of sock'; Patyegarang, the young Eora girl who co-authored the world's most surprising dictionary; and Trim the cat, who beat a French monkey to become the first animal to circumnavigate Australia.

Our nation's beginnings were steeped in the unlikely, the incongruous and the frankly bizarre. Girt restores these stories to their rightful place. Not to read it would be un-Australian.

Girt is published by Black Inc. and available now