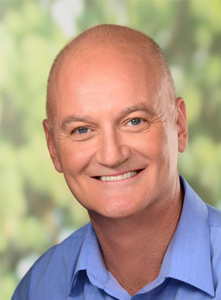 David has had a life-long obsession with the Titanic and has become an expert on the subject. In 2009 he was awarded a Commonwealth Government scholarship to write The Midnight Watch as part of a Doctorate in Creative Arts at the University of Technology, Sydney. The doctorate was conferred in November 2013. David's research for The Midnight Watch took him to many and varied places around the world including libraries and sites of interest in New York, Boston, London and Liverpool.

David is currently a teacher and writer, living part of his time in central Sydney and also in Katoomba in the Blue Mountains. The Midnight Watch is David's first novel.

Charles Dickens' Nicholas Nickleby. Well, I'm still reading it actually - it's quite a thick book. I love it. It has a magnificent cast of characters and explores themes that still resonate loudly, especially in our brave new Trumpian world: money corrodes your soul; people who seek power are often ridiculous; human cruelty knows no upper limit; money, stupidity and vanity are a poisonous mix; a truly civilised society will always protect its poor and dispossessed.

Yes! When I lived in London I became a reader of the British Library and visited it often to carry out research. I learned it has 635 kilometres of shelves, which grow 12km every year, which equals 33 metres of new shelving every day. Impressive. But last year I visited the Library of Congress in Washington DC and learned that it was even bigger and better. Its budget is $1000 dollars a minute. That's beyond impressive.

But neither of those are my favourite. My favourite is Warilla Library, the library of my childhood. The collection is not the largest in the world - only two or three rooms - but when I was young it had the World Book Encyclopedia and lots of Agatha Christies, and that was enough to spark a lifelong love of reading.

Well, my novel The Midnight Watch is based on a historical figure - Herbert Stone of the steamship Californian - and in one scene I depict his wife talking to a journalist in a Liverpool pub. Recently, I was surprised to see on my Facebook page a message from Herbert Stone's grandson: 'You put my grandmother in a pub. She wouldn't have liked that!'

Perhaps, I thought. But then, Mrs Stone was only in her twenties when I put her in a pub. And I doubt her grandson knew her then, when she was young and feisty.

From Elmore Leonard's 10 Rules of Writing: never open a book with the weather, and avoid exclamation marks and the word 'suddenly' at all costs.

What inspired you to write The Midnight Watch?

The Titanic story is a famous one, but I had always known that lurking in its folds was the lesser-known tale of men on a nearby ship who watched the Titanic sink and did nothing about it. They had seen the Titanic's distress rockets with startling clarity. So why didn't they help? I travelled the world to find the answer, and once I had it, I knew that someone had to tell their perplexing and rather tragic tale. Why not me?

Want to read more about The Midnight Watch? 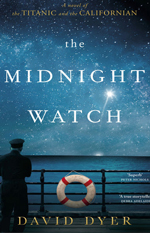 David Dyer's astonishing novel The Midnight Watch is based on the true story of the SS Californian, the ship that saw the Titanic's distress rockets and yet, unfathomably, did nothing. A psychological thriller.

Sometimes the smallest of human failings can lead to the greatest of disasters. As the Titanic was sinking slowly in the wretchedly cold North Atlantic, she could see the lights of another ship on the horizon. She called for help by Morse lamp and the new Marconi telegraph machine, but there was no response. Just after midnight the Titanic began firing distress rockets.

The other ship, the Californian, saw these rockets but didn't come. Why not?

When the story of the disaster begins to emerge, it's a question that Boston American reporter John Steadman cannot let go. As soon as he lays eyes on the Californian's captain and second officer, he knows a story lurks behind their version of events. So begins his strange journey towards the truth. Haunted by the fifteen hundred who went to their deaths in those icy waters, and by the loss of his own baby son years earlier, Steadman must either find redemption in the Titanic's tragedy or lose himself.

Based on true events, The Midnight Watch is at once a heart-stopping mystery and a deeply knowing novel – about the frailty of men, the strength of women, the capriciousness of fate and the price of loyalty.

The Midnight Watch is published by Penguin Books and available now.