This month, we talk to author Elizabeth Coleman, author of Losing the Plot. As a screenwriter Elizabeth has written for many of Australia's most popular dramas, including Miss Fisher's Murder Mysteries, and has also published four plays, including Secret Bridesmaids' Business.

Losing the Plot is her first novel.

I've just finished Patricia Highsmith's Strangers On a Train and The Talented Mr Ripley. They're both terrific thrillers that more than stand up to the test of time. It's amazing how Patricia Highsmith can use a murderer as her narrator and never lose our sympathies. (It's okay, that's not a spoiler!)

The Victorian State Library is my favourite, mainly because of its beautiful octagonal Reading Room. You can see the sky through a dome six stories high, and long desks radiate out from the centre like points on a star. One of the pivotal scenes in my book is set in this room.

The New York Times once said that one of my plays was mean-spirited. I was half-amused and half-appalled. Like everyone I have many faults, but I've never been accused of being mean-spirited before or since. I'm far more likely to attract the opposite criticism - that I'm too nice!

Just do it. (Hang on, I think I'm getting confused with an advertising slogan). But seriously, just write. It's easy to get caught up with theory and making excuses not to do the hard yards, but nothing will teach you more about writing than actually doing it.

I had a bad experience as a young screenwriter that I now realise was the inspiration for the plagiarism story in Losing the Plot, although I wasn't aware of that when I was writing. The subconscious is a sneaky beast!

Want to read more about Losing the Plot? 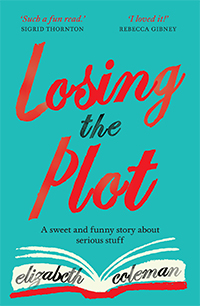 Vanessa Rooney is a thirty-something dental hygienist who finds herself a single mum with a hole in her heart where her husband had been. Somehow she finds the courage to fulfil her childhood dream of writing a romance novel but soon discovers that her novel has been plagiarised by her idol, celebrity author Charlotte Lancaster. Vanessa reluctantly sues Charlotte with the help of suburban solicitor Dave Rendall, who's nursing some unfulfilled dreams of his own. When gun QC Marcus Stafford agrees to join their legal team, Vanessa feels like her perfect man has stepped right out of the pages of her book and into her life. As all hell breaks loose publicly and privately, Vanessa confronts a painful past and realises what Dave already knew - that she's an intelligent, funny, amazing woman and Marcus Stafford is, well, a tosspot. Vanessa finally understands that what she wanted wasn't what she needed, but has this realisation come too late?

Losing the Plot is published by Allen and Unwin and is available now.