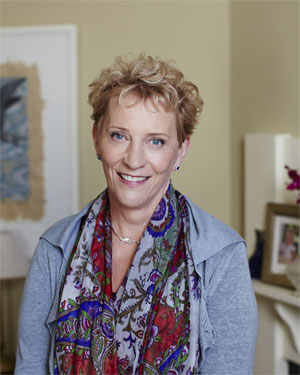 Helen Brown grew up in New Zealand where she became an award-winning newspaper and magazine columnist as well as a popular scriptwriter. Helen's memoirs Cleo and After Cleo became international bestsellers and are available in a vast array of countries and languages.

A New York Times bestseller, Cleo is also currently being made into a film by the producers of The Whale Rider. Like the main character of Tumbledown Manor, Helen has ancestral ties with rural Victoria from back in the gold rush days.

She lives in Melbourne with her husband Philip and temperamental cat, Jonah. She has three adult children and two granddaughters.

On a recent visit to the MONA in Tasmania I stumbled across The Very Hungry Bum in the gallery shop. This glorious parody of The Very Hungry Caterpillar had me laughing so loud my husband escorted me outside.

Author illustrator Claudia Rowe, who lives in country Victoria, is a giant intestinal rumble of talent. I quickly purchased it along with the companion volume, Where the Wild Bums Are. Both books have my adult kids in stitches. My four year-old granddaughter, on the other hand, reads them po faced.

Earlier this year, the librarian on the tiny island of Sylt in the North Sea contacted me through Facebook. He invited me to visit and give a reading next time I was in Europe. I hadn't heard of Sylt, but later learnt it's a playground for Germany's rich and famous.

It was cold and so windy the day we arrived I had to clutch lampposts to stay upright, but the librarian and his wife couldn't have been more welcoming. His efforts to make the charming little library a centre of the community were paying off. A surprising number of locals showed up for the reading that night.

There's plenty of strangeness out there. Some of it has quirky appeal, but I tend to avoid it. A newspaper office in the early 1970s was a great training ground for dealing with criticism. Still, you'd have to be pretty strong to seek out one star reviews on Amazon and take them seriously.

Some days you write. Other days you just type. The main thing is to show up in front of the computer.

When I was a girl, Dad often talked about the manor house his mother lived in near Castlemaine. He had a few battered photos, which we had repaired before he died. It certainly looked grand. A couple of years ago I persuaded my husband to drive me to Castlemaine. We rattled down a lane and stopped outside the house. Beautifully maintained and in no way tumbledown, it looked glorious in the afternoon light. “Thank God it's not for sale,” I said. “I'd buy it on the spot.” That was how Lisa's story began. 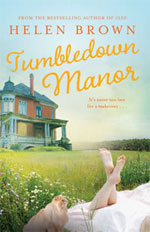 Life's going down the gurgler for romance writer Lisa Trumperton. The deadline for her next novel is looming, her daughter won't eat but has a new tattoo each week, and now her Wall Street trader husband has run off with a woman at work.

Lisa makes a quick escape, home to Australia, where at least her girl-magnet son seems to be making hay. Determined to grow older disgracefully, she turns her back on a trim and tidy townhouse that is close to shops, aged-care providers and her bossy older sister, instead buying a grand old house in the country that once belonged to her great-grandfather.

But like its new owner, Trumperton Manor has seen better days. Crumbling, filthy and possibly haunted, the old house defies Lisa's attempts to restore it. Add flood, fire and family secrets, plus a stray cat with attitude and an overly familiar handyman, and the cracks begin to show.

Richly observed and laugh-out-loud funny, Tumbledown Manor is for anyone who believes it's never too late for a makeover.

Tumbledown Manor is published by Allen & Unwin and available now