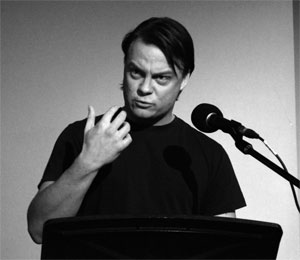 Luke Carman self-identifies as an anti-folk monologist working in epi-grammatical short fiction. He hails from the Sydney suburb of Liverpool and his work has haunted the journals HEAT, Westside and Cultural Studies Review.

In the preface to The Nigger of The Narcissus, Joseph Conrad writes ‘A work that aspires, however humbly, to the condition of art should carry its justification in every line.’ That’s a high bar to set, and few prose writers are up to the task – but it is a standard met by both the novels I’ve read most recently: The Swan Book by Alexis Wright, and The Tribe by Mohammed Ahmad. The first should have won the Miles Franklin this year, and the second deserves it for 2015.

The new Bankstown library knocked my socks off! I felt an uncharacteristic sense of hopefulness after the unveiling this year. Apart from that, I don’t care much for libraries at all. I signed the petition to save the Mitchell from becoming a hub, but only because I hate hubs.

On my mother’s side, I come from an old Scottish clan called Guthrie. Their motto – Sto Pro Veritate – translates to English as ‘I stand for truth’. It’s a bit lofty, but as a guiding principle it’s better than most. For the sake of full disclosure, I should point out that the clan’s name translates to something like ‘full of wind’.

The narrator of my book is its subject. He is a young white man from a small mountain on the outskirts of suburban Liverpool, an incoherent province of an incomprehensible country. Sympathy drew me to him.

Want to know more about An Elegant Young Man? 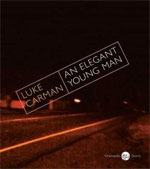 For a long time Western Sydney has been the political flash-point of the nation, but it has been absent from Australian literature. Luke Carman’s first book of fiction is about to change all that: a collection of monologues and stories which tells it how it is on Australia’s cultural frontier.

His young, self-conscious but determined hero navigates his way through the complications of his divorced family, and an often perilous social world, with its Fobs, Lebbos, Greek, Serbs, Grubby Boys and scumbag Aussies, friends and enemies. He loves Whitman and Kerouac, Leonard Cohen and Henry Rollins, is awkward with girls, and has an imaginary friend called Tom. His sensitivity in a tough environment makes life difficult for him – he is anything but an elegant young man.

Carman’s style is packed with thought and energy: it captures the voices of the street, and conveys fear and anger, beauty and affection, with a restless intensity.

An Elegant Young Man is published by Giramondo and available now