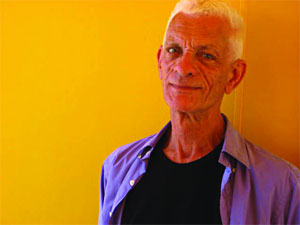 Robert Dessaix is a writer, translator, broadcaster and occasional essayist. From 1985 to 1995, after teaching Russian language and literature for many years at the Australian National University and the University of New South Wales, he presented the weekly Books and Writing program on ABC Radio National. In more recent years he has also presented radio series on Australian public intellectuals and great travellers in history, as well as regular programs on language.

His best-known books, all translated into several European languages, are his autobiography A Mother's Disgrace; the novels Night Letters and Corfu; a collection of essays and short stories (And So Forth); and the travel memoirs Twilight of Love and Arabesques. In 2012 he published the collection of pieces, As I Was Saying. A full-time writer since 1995, Robert Dessaix lives in Hobart, Tasmania.

The last book to really knock my socks off was Joan London’s new novel The Golden Age. For all the darkness of its themes (children with polio, the Nazi occupation of Hungary, the seeming thinness to European eyes of ordinary suburban lives in Perth after the war), I was borne aloft by the finely judged lightness of the writing. I love books where vast themes and small lives dovetail, as in E.M. Forster’s novels, or Tolstoy’s or Turgenev’s, but I rarely come across them.

The only library I go to in Hobart is what we once happily called the State Library of Tasmania, but are now obliged to call LINC. How snappy, how uninviting. All the same, now and again, when I’m in the mood for a bit of browsing or research in the sun, surrounded by books and other readers, rather than home alone with my computer, I’ll spend a morning or afternoon at LINC. I hope one day we can again call it the State Library.

The review of my latest memoir in a gentlemen’s fashion magazine calls it ‘a cute little page-turner’ worth ‘giving a read’ after polishing off a ‘nice G&T’. ‘Page-turner’? Nobody ever called one of my books a ‘page-turner’ before.

The best piece of writing advice I’ve ever received was not about writing at all, but about broadcasting. When I first joined the ABC to present Books and Writing, I was told never to talk to ‘Australia’, because there was no such thing, but always to share my thoughts with a friend who was fond of me, yet not uncritical, allowing everyone else to eavesdrop. This is where my writing voice comes from. Unless you know exactly who you’re talking to, what you have is not a voice, but words.

The themes of What Days Are For are my constant themes, the same ones I’ve approached from various angles in every book since my first, A Mother’s Disgrace: how to live well, given the shortness of our lives; intimacy and friendship; kinship and kindred spirits; the eros of language; the need to travel; growing older well; renewing the heart. But I rarely write unless confronted with the need to find exactly the right words for something I’m going through, and in this case it was recovery from a heart attack. Most memorable writing, I’m inclined to think, is about restoring something vital that has been broken or frayed. This book is about recovering my heart. It’s sad in patches, but mostly farce.

Want to know more about What Days Are For?

One Sunday night in Sydney, Robert Dessaix collapses in a gutter in Darlinghurst, and is helped to his hotel by a kind young man wearing a T-shirt that says F*** YOU. What follows are weeks in hospital, tubes and cannulae puncturing his body, as he recovers from the heart attack threatening daily to kill him.

While lying in the hospital bed, Robert chances upon Philip Larkin's poem 'Days'. What, he muses, have his days been for? What and who has he loved – and why?

This is vintage Robert Dessaix. His often surprisingly funny recollections range over topics as eclectic as intimacy, travel, spirituality, enchantment, language and childhood, all woven through with a heightened sense of mortality.