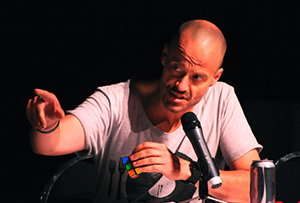 A lifelong numbers nerd Adam flitted with a law degree and a PhD in pure maths before winning, of all things, a stand up comedy competition run by triple j radio entitled "raw comedy". This national search for as yet undiscovered talent continues today but as Adam explains "I entered in its very first year - the standard was appalling - so I went really well".

Through this Adam met the good people at triple j and within a couple of years was hosting the breakfast radio show with his good friend Wil Anderson. After 6 years Adam and Wil called it a day. But a year later Adam was back on the grown up ABC Sydney radio station 702 where for 8 years he set ratings records and maintained second place in Australia's largest and most competitive market.

In December 2013 he called an end to 8 years of news, traffic, weather and chess results on what was without doubt the geekiest radio show Sydney had seen in a very long time, if ever.

Adam has complemented his radio career with numerous television roles hosting everything form the nation science show Quantum to poker championships, to appearing on the weekly sports review The Back Page and ABC news and current affairs wrap The Drum. His Sleek Geeks Science Comedy show with Dr Karl Kruszelnicki was a particular favourite of the public.

A passionate sports lover he is an ambassador for the Sydney Swans and coached a women's soccer team at the University of Sydney for over a decade.

He is the University's first ever ambassador for mathematics and science and is aligned with numerous charitable causes. He serves on the board of directors of Redkite, is an ambassador for the Fred Hollows Foundation and was a co-creator via his radio show of Dry July which has raised over $15 million for adult cancer services in Australian hospitals.

Adam Spencer's Time Machine signed copies of which are available at adamspencer.com.au. Whoops sorry, I went into self published author interview default mode there. I'm halfway through Julia Baird's regal biography Victoria and it’s wonderful. I don't normally read bios and I'm captivated by it.

I visited a private library in Italy once and a small plaque on one of the desks indicated that the great mathematician Lagrange had once sat at that very place. I don't know if I will ever forget that library moment.

I created the problem myself. Just the other day I mischievously posted a photo on Instagram suggesting I was going back to host triple j radios breakfast show next year. I thought it was patently a joke... until it got several hundred likes and excited comments. Oooops, sorry!

What inspired you to write Time Machine: A Wild Ride Through the Ages?

I'm constantly amazed by the human mind and the incredible things we have discovered, dreamt and done to each other. I thought I'd cobble a long list of them together and see if others shared my fascination.

Want to read more about Time Machine: A Wild Ride Through the Ages? 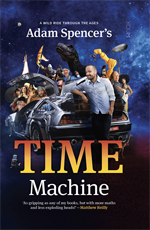 Time Machine starts tens of thousands of years ago with an ancient "counting stick", perhaps the oldest scientific device we’ve ever found and ends earlier this year with a single mathematics proof that needed so much computer grunt it would take one person 10 billion years to read! In between we stop along the way at hundreds of interesting, inspiring or just plain bizarre moments in human history.

Did you know that some of the earliest astronomers were Indigenous Australians? Or that Lord Byron’s daughter, Ada Lovelace, was a pioneer of computer programming... despite dying in 1852? Can you believe that pinball was actually illegal across much of the US until the 1970s? And who or what is the Witch of Agnesi?

All this and more is in Adam Spencer's new book, Time Machine. Jam-packed with fascinating facts, quizzes, anecdotes and trivia, this full-colour geek’s guide is the perfect companion for curious minds.

Time Machine: A Wild Ride Through the Ages is self-published by the author and available now.