Daniel Cooper was born at Bolton-le-Moors, Lancashire on 1 July 1821, the second son of Thomas Cooper, a weaver, and his wife, Jane (née Ramsden). In the 1820s he came to Australia with his parents but returned to England when he was 14 to complete his education at the Junior School of University College, London.

Due to ill health Cooper was forced to abandon his studies in the law and joined a firm at Le Havre to gain commercial experience. In 1842 he returned to London where he worked in the office of his uncle, also Daniel Cooper (1785-1853).

Daniel Cooper was to benefit handsomely from his uncle Daniel’s generous support and business success in the colony of New South Wales. Cooper’s uncle had been convicted of larceny and sentenced to transportation for life to New South Wales in 1815, receiving an absolute pardon in 1821. He arrived in Sydney in 1816 and within a few years had established a series of profitable business interests. He invested in local shipping and became a partner in a flour mill in 1821, the forerunner of the famous Waterloo Company. Cooper established a new partnership with another emancipist, Solomon Levey and further ventures were undertaken.

Cooper and Levey began acquiring land that included the substantial Point Piper Estate, comprising 1130 acres in the Woollahra district which had been amassed by the military officer and public servant, John Piper since 1816. After experiencing some financial difficulties Piper conveyed the Point Piper Estate to Daniel Cooper and Solomon Levey in 1826 and a further 190 acres of land at Point Piper to Daniel Cooper in 1827. Cooper and Levey's  title to the land was confirmed in 1830 and it became the sole property of Daniel Cooper in 1847. Daniel Cooper moved in to the house Henrietta Villa that John Piper had built at Point Piper in 1822, before returning to England in 1831. He continued to manage many of his colonial interests through his office in London. He died in Brighton on 3 November 1853.

Daniel Cooper left his uncle’s London office and joined the Cooper firm and business partner James Holt in Sydney in 1843. After Holt returned to England, the partnership with him was dissolved and Daniel and his brother William took over the business. In 1852 Daniel Cooper took sole control of the business which prospered under his directorship.

Cooper married Elizabeth Hill, the daughter of William Hill, in Sydney in 1846. They had two sons and five daughters.

When his uncle died in 1853 Cooper inherited great wealth from his uncle’s personal estate. Cooper was appointed trustee of the Point Piper Estate which his uncle had bequeathed to his nephew’s son (also Daniel Cooper). Cooper was responsible for the management of the estate until his son’s twenty-first birthday in 1869. 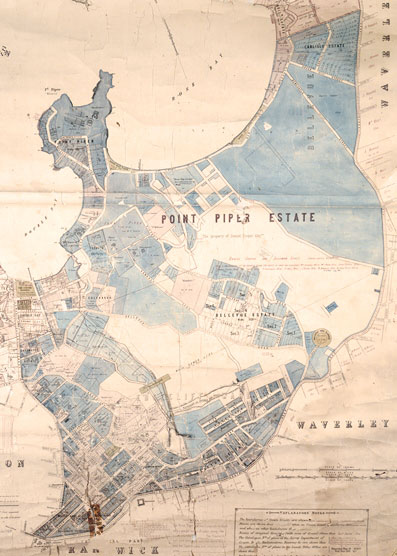 Portion of the municipal map of Woollahra showing the extent of the Point Piper Estate, 1889

Cooper began his parliamentary career when he became an elected member of the Legislative Council in 1849. In 1856 with the commencement of responsible government, he was returned as a member of the first NSW Legislative Assembly representing Sydney Hamlets from 1856 to 1859, and then the member for Paddington from 10 June 1859 to 10 November 1860. Cooper was a political associate of Sir Charles Cowper and Sir Henry Parkes and his interest in public affairs he attributed to Parkes’ influence. He was elected first Speaker of the Legislative Assembly in 1856, a role for which he was praised, at his retirement in 1860, for conducting with dignity, skill and impartiality (The Empire 31 January 1860, p.4).

As Cooper’s career advanced so did his standing in colonial society. In 1856 the Governor, in front of over 400 guests, laid a foundation stone for the mansion Cooper intended building at Point Piper, in place of Henrietta Villa. The report of the ceremony in The Empire noted that the house, designed by architects Hilly and Mansfield, was to take the name ‘Woollahra’ (15 December 1856, p.5). Cooper left for England in 1861 before the house could be completed. At the time of the laying of the foundation stone Cooper was living at Rose Bay Lodge on the foreshores of Rose Bay. Woollahra House was eventually built to the new design of John Fitzpatrick in 1883 for Daniel’s son William. It was demolished for residential development in 1929.

After his retirement from politics Cooper left for England and although he never returned to live in Australia he continued to be supportive of the interests of the colony. He pushed for reform of the London wool marketing system in the 1870s and he acted as agent-general for New South Wales on a number of occasions.

In 1881 he was chairman of the London Committee of the Sydney International Exhibition and in 1886 he sat on the royal commission for the Colonial and Indian Exhibition in London. He advocated imperial federation and in 1880 he published his work A Federal British Empire the best defence of the mother country and her colonies.

Cooper was a generous philanthropist, contributing to the relief of widows and children of soldiers killed in the Crimean War and to relief funds for distressed workers in the Lancashire cotton famine.

Rose Bay Lodge, originally known as Rose Bay Cottage, was built for James Holt, a cousin to emancipist Daniel Cooper. Holt had arrived in Sydney in the mid 1820s, and was employed in his cousin’s firm of Cooper and Levey, becoming a partner in 1834. Soon after, Holt engaged the noted and most fashionable architect of the day, John Verge, to design his family home which was situated on part of the Cooper estate on Rose Bay.

Holt left for England in 1845 and after leasing the house for a number of years Sir Daniel Cooper took up residence himself in 1855. When Cooper returned to England in 1861, the house, now known as Rose Bay Lodge rather than Cottage, was again available for lease. A number of prominent people occupied the house including Sir John Hay who became tenant in 1866. Hay remained at Rose Bay Lodge until his death in 1892.

The house was then leased to Mrs Rosa Rougier, who purchased the house and grounds in 1900. Mrs Rougier subdivided the property which was offered for sale in 1911. After its sale a number of additions, including a second storey, were made to the house which was converted into flats.

A permanent conservation order was placed on the house in 1984 and it was purchased by the Department of Environment and Planning. By the time the house was sold in 1993 it was in poor condition. In accordance with the stipulation that the house be restored in keeping with the conservation plan, Design 5 Architects took on the restoration project. The completed restoration of the house resulted in the bestowal of a number of architectural and conservation awards in 1997.

Sir Daniel Cooper was an astute businessman and was commonly described as a generous philanthropist and likeable personality. An article on the new parliament in The Empire on 20 March 1856, p.8, reported favourably of Cooper praising his ‘natural disposition full of kindness, and the rare virtue of withstanding the lower influences of wealth’ continuing that ‘it is no wonder that Mr. Cooper should acquire popularity as a public man’.

The name given by Sir Daniel Cooper to his planned new house at Point Piper, ‘Woollahra’, was adopted by the new municipality of Woollahra formed in 1860. The subdivision of the vast Point Piper Estate in the late 19th and early 20th centuries contributed to the development and appearance of much of the Woollahra district.