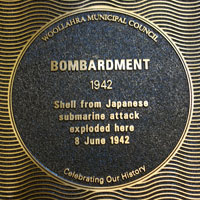 In late May and early June of 1942, Sydney came under attack from Japanese Navy submarines. On the night of 31 May three midget submarines entered Sydney Harbour and during the ensuing raid the HMAS Kuttabul was sunk, killing 21 sailors. Following the raid, the Japanese fleet submarines that carried the midget submarines to Australia began a campaign to disrupt merchant shipping in eastern Australian waters.

Shelling of the eastern suburbs

In the early morning of 8 June 1942 two of these Japanese submarines, I-21 and I-24, shelled Sydney and Newcastle. At 0014 hours the Japanese submarine I-24 surfaced off the coast of Sydney and launched an attack, with shells landing in the eastern suburbs of Rose Bay, Bellevue Hill, Woollahra and Bondi.

Shells from the submarine exploded at 3 Plumer Road and 67 Balfour Rd, Rose Bay, at 4-6 Bradley Avenue and 9 Bunyula Rd, Bellevue Hill and in Woollahra at the corner of Small and Fletcher Streets (1 Small Street). Other shells were found unexploded in Rose Bay at Manion Avenue and Beresford Road, and in Bondi at 34 Simpson Street. There was some property damage and minor injuries but no fatalities.

An inventory of shells landing in the Woollahra municipality compiled by the Chief Warden, was tabled at a meeting of Woollahra Council held on 8 June 1942:

In a recent publication, A Parting Shot, shelling of Australia by Japanese submarines, the authors Terry Jones and Steven Carruthers reveal that a shell may still be buried under the Royal Sydney Golf Course in Kent Road. 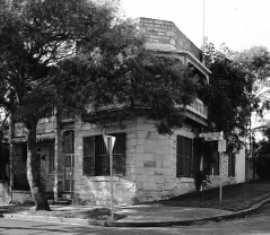 The shell at the corner of Small and Fletcher Streets exploded a few metres from the front door of the ground floor grocery shop at 1 Small Street. The impact of the shell created a small crater and shrapnel was thrown over a wide area causing damage to houses in Small Street (nos. 1 and 2) and Fletcher Street (nos. 44-52). Shrapnel from the blast was found as far away as Streatfield Road in Bellevue Hill. At 1 Small Street glass in the windows and doors to the store and upstairs residence was shattered, the external stone walls were scarred by metal splinters and stock in the grocery store was ruined. The  upstairs occupants, Stanley and Alice Richards, were thrown from their bed by the force of the explosion.

Impact of the attack

The attack on Sydney was a significant war-time event for both local residents and the nation. While not creating great physical damage the bombardment did cause psychological damage by increasing real fear of a future Japanese invasion.