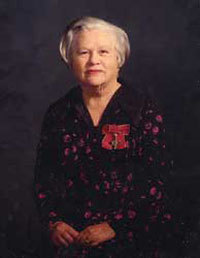 Belle Miller was awarded the Order of the British Empire - Member (MBE) on 14 June 1975 for her service to the community (Lois Downing).

Born Amanda Isabelle Neeld on 11 August 1903 in the Sydney suburb of Petersham, Belle was the eldest daughter of John Locksley Neeld and his wife Amanda Anastasia Neeld (nee Donnelly). John Neeld’s father and brothers were pioneer pastoralists and prospectors of the Wyalong district, who opened up one of the richest gold areas in New South Wales. They were also active participants in the progress and public life of the township that came to be centred upon their mining claims. Belle’s grandfather was the first of many family members elected to the local shire Council, and Belle herself admitted to ‘having been interested in local government for as long as she could remember’ (Eastern Suburbs News 19.10.1960, p. 9).

Belle Neeld’s early childhood was spent in Melbourne. A London College of Music student, who had by the age of 14 memorised all Beethoven’s piano sonatas, Belle remembered playing for Melba as a young girl at a social function at her parent’s home. Later, the family moved to Mount Street Coogee. It was a comfortable, secure upbringing enriched by exposure to every cultural experience her parents could provide, but the death of Belle’s father in 1924 lead to an abrupt reversal of fortune for his widow and children. Family assets were sold of necessity and Belle and her sister were propelled into the workforce, each equipped with an education that had not prepared them for this unforeseen contingency.

Belle began her employment in the women’s wear department at Farmers Department Store in George Street Sydney. A keen eye for good design saw her begin to experiment with her own creations, teaching herself the art of dressmaking by taking apart her mother’s Parisian-label clothes to examine how they were made. Her initiative, with the support of her employer, led to a change of career that culminated in the establishment of her own label Millersons, and a business employing seventy workers. None of this was easily achieved, as the early years of her operation coincided with the Great Depression. Military contracts during the war years benefited her operation and she consolidated her gains in the postwar era.

Whether because of the years of financial struggle or because of a natural sense of social justice, Belle never lost sight of the difficulties that face the disadvantaged in our community. She held firm views concerning the obligations of those whose circumstances placed them in a position to help. This philosophy was expressed in her own dedication to public service – of which her period as an alderman was only one example. Her inability to resist involvement in community matters earned her the family title of ‘The Joiner’, as she joined so many committees and associations as a result.

Some of the organisations that benefited from Belle’s membership were the NSW Council of the Ageing, the Country Women’s Association, Woollahra Progress Association, Vaucluse Sailing Club, and the Board of the Waverley aged-care facility Edina. Her business life also launched Belle into membership of a number of bodies supporting Sydney commerce, such as the Chamber of Manufacturers and the Business and Professional Women’s Club. Her broad contribution was recognised by the award of an MBE for community service in 1975. 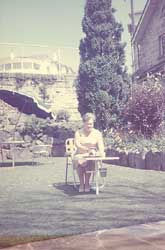 With her election to Woollahra Council at the age of fifty-six, Belle was able to put to use experience drawn from both arenas of her life – business and community service. As an alderman, she was resolutely an independent, assessing all proposals and issues according to her own values and instincts.

She brought her designer’s eye to bear on matters large and small, from the selection of street furniture for Double Bay to major issues of Town Planning. She has been credited with keeping Vaucluse free of overdevelopment during a period when Council was under considerable pressure to embrace large-scale change.

Belle was an advocate for good community facilities made readily accessible to all. One of her earliest moves on Council was to persuade her fellow aldermen to waive the fees charged to schools for their use of sporting fields in the municipality. Similarly successful was her proposal, on behalf of the local swimming clubs, to enlarge the baths at Watsons Bay to meet competition standards. On the other hand, her ambitious scheme to create a women’s bowling centre at Gap Park met with defeat when opposed by an equally formidable and determined woman – the well-known conservationist Thistle Harris Stead.

Belle Miller’s major concerns, however, centred on the provision of essential services for those in need – especially the elderly. In 1961 she applied the motto ‘for residents, by residents’ when she proposed the foundation of the Woollahra Voluntary Community Services (WVCS), the innovation which is the major legacy of her Council service. While today the WVCS is best known for the distribution of delivered meals to the housebound (‘Meals-on-Wheels’, introduced in Woollahra in March 1965), it was initiated with broad welfare aims, some of which are now met by other agencies. 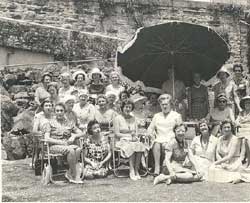 Belle Miller (central figure, under umbrella) with her team of WVCS volunteers photographed in Blackburn Gardens in December 1963.

The WVCS was conceived as a means by which the effectiveness of local volunteer efforts could be maximized through a central administration, partially sponsored but not controlled by Council. The scheme had no forerunners, and Miller was required to persuade an understandably hesitant Council to vote its support. In the ensuing years however, the success of the WVCS earned accolades in local government and planning circles for both its founder and the Council. Miller was publicly hailed as a ‘pioneer, twenty years ahead of her time’ and her scheme as a ‘blueprint’ for others to follow (Woollahra Voluntary Community Services Woollahra Local History Research File). 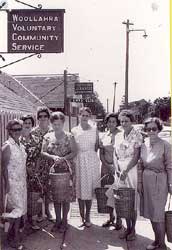 The end of her Council service in 1971 did not signal the end of Belle Miller’s involvement in either community organisations or local issues. In particular, she continued to chair the committee of the WVCS for a further eight years until ill health forced her to stand aside. It was remarked at that time by Brenda (Dutchie) Backhouse, who eventually succeeded her as Chairman, that the service was ‘a tribute to Mrs Miller’s deep appreciation of the needs of those who are disadvantaged in various ways’ (Wentworth Courier 4.7.1979 p. 3).

As the first woman alderman on Woollahra Council in a century of civic administration, Belle Miller secured acceptance for the women who followed her into the chamber

She said in 1960 of her status as the sole woman at the council table, ‘We work well together. Once a man finds a woman can use her brain like he can, he accepts her without restraint. Of course, a woman has to work twice as hard as a man to be noticed in the first place.’ (Eastern Suburbs News 19.10.1960, p. 9).

Belle married twice in 1933 to William Gray, father of her children John and Lois, and to James Raeburn Miller in 1939. As a mother of two, working long hours to establish a business, she met and managed the practical difficulties of childcare and strived to achieve a balance between work and family life.

In later years, the calls on her time from public life created a further challenge, and she paid public tribute to the support of ‘a very considerate and helpful husband’ (Eastern Suburbs News 19.10.1960, p. 9).

Belle Miller is remembered for her courage in dealing with adversity and the tenacity with which she pursued her aims and ideals. She spent the final years of her life in Queensland, where she died in Southport in July 1988. Her husband having predeceased her in 1972, she was survived by her son, John Geoffrey Neeld Gray and daughter, Lois Margaret Downing.