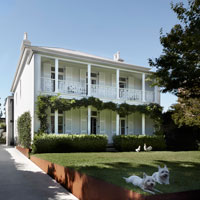 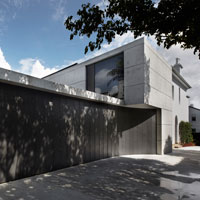 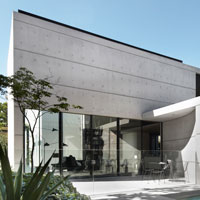 Vote for this project >

What did the project involve?

The transformation of ‘Orama’ involved the enhancement and extension of an historic Victorian villa in Woollahra, to create a comfortable family home. The renovation of the villa responds to its existing architectural quality. Luxurious in space and detail, the design concept aimed to update the rooms with sensitively-chosen fittings and fixtures. Beautiful original elements - notably fireplaces and early paint schemes - were retained. Deft modern interventions into the fabric make the house crisp, trim, and tailored.

The new wing complements the grace and substance of the original house, but in a modern way. Where the old building is rich in detail, the new is pristine and simple. The striking double-height concrete walls, animated by sunlight, furnish the rooms with little need of embellishment. Separated by a century and a half, the two parts of ‘Orama’ stand as beautiful expositions of the best construction standards of their day.

How does the project reflect design excellence in its category?

The public and cultural benefits draw from the rehabilitation of an historic house prominent in the streetscape, and part of an identifiable pattern of development in the area. The house takes a bold approach to working in conservation areas – building with the same substance and attention to detail as in the past, but in a distinctly modern way.

The form of the new wing takes cues from the blocky pattern-book forms of the villa ensemble of which ‘Orama’ is part. This relationship - largely hidden from the street - is revealed only within the site. The new architecture is discreet, doffing its cap to the historically significant villa that stands before it. The beauty of the house can be found in the detail of its components. SDS worked closely with the artisans involved. Historic ceilings in the old villa were carefully restored by a specialist in decorative finishes. The concreter beautifully realised the vision of a fair-faced concrete structure with not a tie rod out of place. The metalworker made the modern entrance gate and steel portals linking the old and new houses with a rare craftsmanship. The landscape architect integrated sandstone salvaged from the original villa into the garden.

The project has generated value in the environmental, social, and economic domains. Environmentally, the project has sustainable architecture at its core. ESD-based elements are stitched into the house, including hydronic floor heating and cooling, natural ventilation, and exploitation of solar orientation, thermal mass, and heat-exchange technology. Six-metre tall windows at once exploit modern construction capabilities, and overcome the constraints of a south-facing site to bring natural light deep into the plan of the house. The concrete walls and floors extend out into the garden, forming a seamless link between interior and exterior. The house rejects air-conditioning, relying instead on passive solar design and environmentally sustainable methods of climate control.

Socially, the project has value for the streetscape as it reinvigorates a once-dilapidated house of historic importance, improving the quality and character of the villa’s locale. The project has value in its bold approach to working with buildings in conservation areas, pointing to a way of creating modern architecture of equivalent substance and attention to detail, as the grand villa which forms its core. At a smaller scale, the social value of the project (as with most domestic architecture) lies in the satisfactory realisation of the client’s brief for a deeply-comfortable home, able to accommodate a couple with grown children. The house exceeds the expectations of lovers of historic architecture and cutting-edge modernity alike.

Economically, the house was designed with fiscal responsibility at the forefront. The plans were costed early in the design process to align the project brief with the client’s budget. This precluded ‘bill shock’ at the tender stage, and allowed careful control of the budget throughout the build. Such an approach, by putting the budget on the table upfront, helped manage the client’s experience of working with architects and builders through the often-fraught process of renovation.

What exemplary design features does the project display?

Innovative design aspects of this project include: