These images were taken in 2019 before the Covid-19 pandemic. Every Sunday, and on public holidays, tens of thousands of migrant domestic workers would gather in Hong Kong’s public spaces, sitting on cardboard mats in the shadow of luxury retail shopfronts, major banks and malls. After a gruelling week spent cleaning, cooking and ironing, it was a chance for them to break out of their isolation, swap stories and make emotional calls to their loved ones back home.

Today, restrictions to curb the spread of Covid-19 mean fewer migrant domestic workers are able to meet on the streets and life for them has become even harder. Confined to their employers' apartment, where they are forced to live, they are often compelled to work even on their one day off.

More than 390,000 foreign domestic helpers, mainly women from the Philippines and Indonesia, are employed in Hong Kong. Since the mid 1970s, Hong Kong has had one of the largest populations of foreign domestic workers in the world. 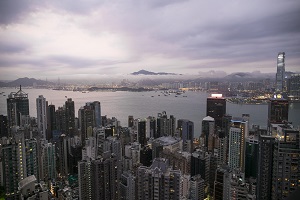 On Hong Kong Island, thousands of foreign domestic workers live and working high-rise apartments such as these in Soho and the Mid-Levels.

There are nearly 400,000 foreign domestic workers (also called “helpers”) in Hong Kong, mainly women from the Philippines and Indonesia, living in conditions that have been described as modern-day slavery.

A standard legal contract for a foreign domestic worker is effective for two years and requires them to live in their employer’s residence at all times. They are not allowed to settle in Hong Kong or to bring their family to live with them. In contrast to most other visa holders, foreign domestic workers are not seen as having “ordinary residence” in Hong Kong and therefore they will never have the chance to apply for residency, regardless of how long they have been living and working there. If a foreign domestic helper’s contract is terminated the 14-day rule applies, which requires the worker to find new employment or leave Hong Kong within two weeks. To find a new job, the workers are required to pay another fee to a recruitment agency. This often results in the foreign domestic worker accumulating more debt to cover the recruitment costs. 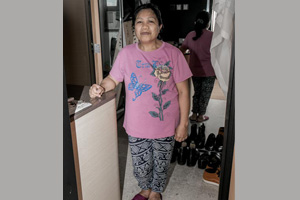 Virginia is a foreign domestic helper from the Philippines who has been living and working in Hong Kong for 27 years.

Foreign domestic workers began coming to Hong Kong since the 1970s when the Philippines, under President Ferdinand Marcos, began to export labour to help solve his country’s poor economic situation. The labour export reduced local unemployment and filled government coffers with the remittances sent home by foreign workers. The increase in the export of labour from the Philippines coincided with large growth in the Hong Kong economy that drove increasing demand for foreign domestic helpers. The Philippines’ economy continues to benefit from the export of labour and today 861 private recruitment agencies, licensed by the Philippine Overseas Employment Agency, manage the flow of mostly female labour.

Foreign domestic helpers are not required to be paid above the standard minimum wage and the live-in rule is the main reason used to justify the low wages. The conditions endured by the majority of foreign domestic helpers in their employers’ homes are hardly adequate; for many, their “own room” doubles as a storage area or a space for pets. Living in such cramped conditions, the foreign domestic helper is constantly on call and has little privacy. Covid-19 has only made the situation more difficult and dangerous for them. 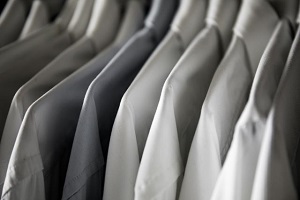 As Hong Kong is one of the most expensive cities in the world to live in, many households rely on a double income to cover costs. The city also lacks affordable care facilities for children and the elderly. The cost of hiring a domestic helper is the most affordable solution - almost three times cheaper than alternatives such as nurseries and private tutors, according to a 2018 survey - and, as a result, one in eight households in Hong Kong employ one. For families with children, the demand for domestic workers is even greater, with one third of them employing a domestic helper. Domestic foreign workers take on childcare responsibilities and household chores during the day, allowing working couples to achieve a higher socio-economic status and increase their quality of life. 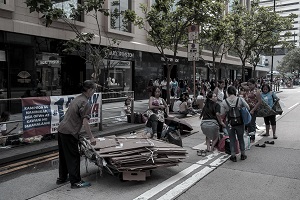 Cardboard is delivered to a group of foreign domestic helpers early on a Sunday morning, their one precious day of rest and recreation after six days confined in their employers’ homes.

Thousands of workers will congregate during the day in public spaces around the city centre - on footpaths, pedestrian bridges, walkways and closed-off streets - and the cardboard will be used as mats for them to recline on while they socialise with fellow workers and contact their families back home.

Cardboard is a strong visual component and a recurring theme in this series of images. This inexpensive material is temporary and fragile, reflecting the delicate and precarious nature of the situation for foreign domestic workers in Hong Kong. The law requires foreign domestic helpers to be given a 24-hour rest day each week. But in a survey conducted with thousands of foreign domestic helpers, almost half responded that they were asked to work on their rest day and 44 per cent stated that their workdays were more than 16 hours long. 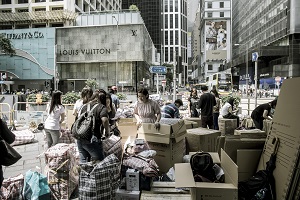 In the shadow of luxury stores on the corner of Charter and Pedder Streets on Hong Kong Island, foreign domestic helpers dismantle cardboard boxes as they prepare for their weekly Sunday gathering.

The get-togethers have been taking place since the early 1980s and have become a part of Hong Kong’s cultural identity. During the Covid-19 pandemic, however, it has become more difficult for many foreign domestic workers to meet and relax on Sundays. Sometimes they are targeted and fined by police for not complying with Covid restrictions. Some employers don’t allow their domestic workers to go out at all because of the risk of catching the virus and bringing it back to their home, leaving the workers with no free time, no privacy and no social contact with family and friends.

It’s been estimated that between 100,000 and 200,000 migrant domestic workers are now stranded in Hong Kong without employment as a result of the pandemic. Under a “flexibility arrangement” introduced in response to Covid-19, domestic migrant workers are now allowed to stay in Hong Kong while searching for a new job after their contract has expired. However, because of the high living costs, for many this means their only affordable option is to stay in boarding houses that are overcrowded and unhygienic, increasing the risk of infection. A one-time payout of HK$10,000 ($1800) offered by the Hong Kong government to non-permanent residents “in need” does not include foreign domestic workers, despite their valuable contribution to the Hong Kong economy. 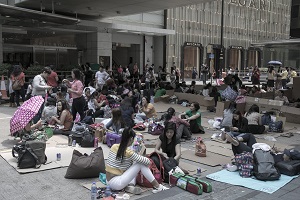 Sundays are often the only time the migrant workers have to take care of their personal affairs and to connect with families who rely on the money they send back home. Many of the women are mothers who are separated from their children because they are often the family’s only breadwinner. They attend church services, shop for presents and ship parcels home. They meet up with friends and other workers, provide support for each other, and seek advice and information from charitable organisations and NGOs about their working conditions and the situation back home. Newly arrived workers use the gatherings as an opportunity to seek out people from regions and local groups from their home country. After the stress of being isolated for six days in their employer’s home, it’s also a chance for the migrant workers to chat and socialise, have performances, dance and have fun. 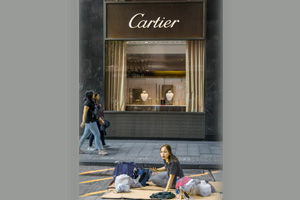 A migrant domestic worker in front of a luxury store on Charter Street, Hong Kong Island.

This image highlights the strong contrast between the wealth of Hong Kong and the plight of many foreign domestic helpers. The hardship that many of these women endure has been described as modern-day slavery. The legal requirement for foreign domestic helpers to live-in for two years with their employers, often without a private room, makes them easy prey for exploitation; some have reported being under constant CCTV surveillance.

About 20 per cent of domestic workers have reported experiencing physical abuse and 34.4 per cent verbal abuse by their employers. Many of these women are forced to accept the abuse they endure at the hands of their employers or risk immediate deportation to their country of origin.

One notorious case of helper abuse captured the city’s attention in 2015 when Hong Kong housewife Law Wan-tung was found guilty and jailed for six years for torturing her helper, ErwianaSulistyaningsih, a 23-year-old woman from Indonesia. Law regularly beat Erwiana and forced her to sleep on the floor for five hours a night. Erwiana was only given meagre rations of food and warned that her parents would be killed if she told anyone.

Foreign domestic workers have long called for a relaxation of the live-in rule but attempts to challenge it in the Hong Kong courts have so far failed. Most recently, in September this year, a ruling was upheld against a legal challenge by Filipino helper Nancy Almorin Lubiano. 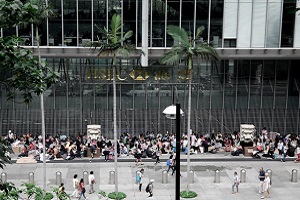 The bank, along with other business and government offices, is closed on Sundays, so the Filipino community has established its own business centre in the nearby World Wide Plaza, which is open each Sunday and during the week.

This image illustrates the contrast between one of Hong Kong’s most powerful banks and the migrant domestic workforce, which represents almost 10 per cent of the city’s working population and contributes much to the local economy ($12.6 billion in 2018, according to a survey quoted in Time magazine). But are often financially exploited. A recent report found that only 18 per cent of foreign domestic workers in Hong Kong have local bank accounts. This was because they lacked the minimum balance and the documents required; also, employers are allowed to pay in cash and are not required to pay wages into a bank account. About 83 per cent of FDWs reported being in debt and almost 80 per cent had to borrow money to cover recruitment costs. 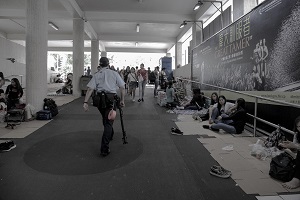 It is dangerous for non-permanent residents to get involved in protests and demonstrations because their vulnerable situation could cause them to lose their employment and visa status and be sent back to their home country. This intimidation of non-permanent residents makes it difficult for them to be involved in, comment on and document political events. This was evident in the case of Yuli Riswati, a foreign domestic worker who as a sideline reported on the pro-democracy protests for an Indonesian-language newspaper published in Hong Kong. Riswati was detained and then deported late last year to Indonesia. While Riswati’s work visa had expired, her employer had provided a work contract until 2021. Freedom of speech advocacy group PEN International's Hong Kong chapter condemned the government’s action, saying it “may be intended to intimidate non-permanent residents and deter them from involvement in or documenting and commenting on political events in Hong Kong”.

Yet despite their precarious situation, migrant domestic workers have a history of holding their own peaceful rallies to protest against their treatment and in support of better conditions, carrying banners such “End modern-day slavery in HK”and“Our lives matter”. 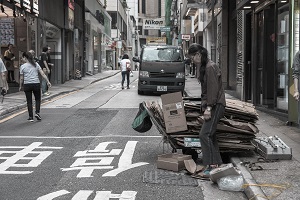 The next morning, a Monday, a woman collects cardboard boxes in Stanley Street, Hong Kong Island.

The migrant workers have returned to the isolation of their employers’ homes, the working week has started again and all evidence of Sunday’s mass gathering of the city’s hidden workforce has been erased, as if they were never there. Next Sunday morning, they will emerge again.